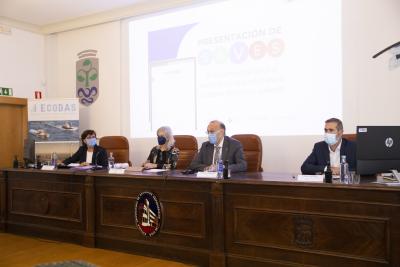 Vigo, October 26, 2021. The official presentation ceremony of SAVES (Virtual Assistance System for Cooperativism and Social Economy) took place at the University School of Business Studies, a center of the University of Vigo closely linked to cooperativism, and was led by the Rector of the University of Vigo, Manuel Reigosa. In addition to María José Cabaleiro and Carlos Iglesias, creators of the tool and one of the main researchers in the field of cooperativism in Galicia, it counted with the participation of the General Director of Employment, Self-employment and Social Economy, Covadonga Toca; the president of the Galician Social Economy Forum (FOROESGAL), Celso Gándara; the director of the School of Business Studies of the University of Vigo, Consuelo Currás; and the president of the association Mulleres de Seu and vice-president of CLUN, Carmen Rodríguez.
María José Cabaleiro was in charge of opening the event with a presentation in which she showed the operation, functionalities and great potential of SAVES for cooperative management, by bringing together data that until now had been scattered in different sources of information and allowing a wide range of economic-financial information on Galician cooperative societies to be consulted easily from any mobile device. Carlos Iglesias ended this part of the application presentation by highlighting the improvements that are intended to be implemented from now on, mainly focused on extending the time period covered by the information and the number of cooperatives registered, which will allow SAVES to continue increasing its performance.
Covadonga Toca, General Director of Employment, Self-Employment and Social Economy, concluded the presentation of the tool by highlighting the concept of cooperation and the value that the social economy brings to Galicia, generating quality employment and focused on people, which is why the Xunta de Galicia is developing actions such as the Eusumo Network or the Galician social economy strategy, which allow to continue supporting and developing it. Celso Gándara, president of FOROESGAL, wanted to thank the University of Vigo for the support it is giving in the cooperativism sector, and pointed out the importance of initiatives such as SAVES for compiling data, making it known and thus adding value to it, and ended his speech by pointing out some needs that could be addressed with the collaboration of the university.
The last to intervene were Consuelo Currás and Carmen Rodríguez. Currás, who made a tribute to the important role that the University School of Business Studies played for the social economy, being the place where the Association of Social Economy was created and the Magazine of Cooperativism and Social Economy, which published its first issue in 1990, was in charge of introducing Carmen Rodríguez, whom she defined as an 'empowered woman' and to whom she expressed her greatest admiration. On her part, an excited Carmen Rodríguez wanted to thank the creators of SAVES for their work and shared with the audience her experiences as a member of a family historically linked to cooperativism and rural life, highlighting the vital and professional reference that her grandmother and her aunt, one of the founders of Feiraco, are for her, and highlighted the importance of carrying out actions to improve the role of women in the management and direction of cooperatives, such as those carried out from the association Mulleres de Seu, which she directs, finishing her speech with a message of optimism in this regard since, although there is still much to improve, the changes are already beginning to be noticed.
The climax of the event was a surprise tribute that the creators of SAVES and the University of Vigo wanted to pay tribute to two people of great relevance in the field of social sciences, Higinio Mougán, manager of Agaca, and Constantino Gago, manager of EspazoCoop: The SAVES Award for a lifetime dedicated to keeping the light of cooperativism burning brightly.
﻿ SUSCRIBE TO ECOBAS