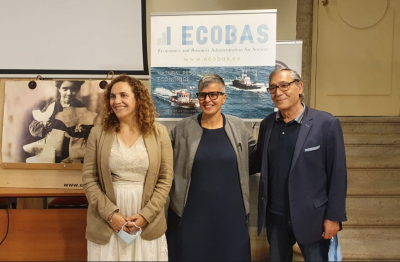 Santiago, September 21.  This afternoon began in Santiago the cycle of transfer seminars entitled "Libra de Oficio" organized by the Interuniversity Research Center ECOBAS. This R+D+i center works in the field of economic, environmental and social sustainability. It also supports the Interuniversity Master's Degree in Economics and the Interuniversity Doctorate Program in Economic Analysis and Business Strategy of the three Galician universities.
Within the activities of the current academic year, ECOBAS is carrying out two new cycles of seminars, the Research Seminars (scientific seminars with reports on economics by national and international researchers of excellence) and the Transfer Seminars entitled "Libra de Oficio", which support entrepreneurship, the Galician company, job creation, gender equality, the cooperative system, etc.
To support the beginning of this new cycle of seminars, ECOBAS counted on an exceptional patroness, Elena Ferro, National Prize of Crafts 2019. The Merza's crafswoman talked to the attendees of the seminar about Eferro, the family business with more than a hundred years of tradition in the craft of souks and Moroccan crafts, which took place at the Museum of the Galician People, in Santiago de Compostela, and was attended by Carlos Hervés and María Loureiro, director and scientific director of ECOBAS.
At the end of the event, the public participated in the raffle of Eferro souks.
﻿ SUSCRIBE TO ECOBAS