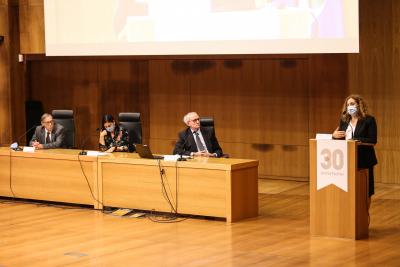 ECOBAS INAUGURATED ITS ACADEMIC YEAR WITH A SCIENTIFIC SEMINAR BY ANTÓN COSTAS, PRESIDENT OF THE CES

The president of the Economic and Social Council of Spain, Antón Costas, participated this morning in the act organized by the Interuniversity Research Center ECOBAS on the occasion of the opening of the academic year. The event was also attended by Councilor Ana María Mejías.
Vigo, September 21, 2021.  The Vice-rector of Research of the University of Vigo, Belén Rubio, was in charge of opening the inaugural event that received the new students of the Master in Economics, arrived from three Galician universities. Rubio also highlighted the importance of having a legal and economic research center in Galicia, an area in which ECOBAS specializes.
The process of change that ECOBAS is carrying out, going from being a Strategic Grouping to an Interuniversity Research Center, was highlighted by its director, Carlos Hervés, who thanked those present, among whom there were also professors and researchers. On the other hand, the scientific director of ECOBAS, María Loureiro, remarked the importance of the training programs supported by the center, the Interuniversity Master in Economics and the PhD program in Economic Analysis and Business Strategy. The researcher also mentioned the different seminars that ECOBAS organizes weekly, scientific and transfer seminars, which will take place in different cities of Galicia.
Carlos Hervés took the floor to dedicate some warm words to Antón Costas and to thank him for his participation in the event. The President of the CES offered a report for all the assistants, the first of the cycle of seminars that Professor Loureiro mentioned previously.  The lecture, entitled "The challenge of building a progressive and sustainable social contract", emphasized for about an hour the importance of economy, sustainability and democracy, as well as the role of researchers and economists to achieve a new "economic epiphany", reaching out more to society and less to politicians and rulers. Costas' presentation aroused great interest among the people present who actively participated in the round of questions, among them the Councilor for R & D of the City Council of Vigo and Provincial Deputy for Business Development, Ana María Mejías, who transferred to the rapporteur her concern about the channels necessary for economists and researchers in general to be able to transfer their knowledge to society in a more democratic way.
﻿ SUSCRIBE TO ECOBAS